Happy to add :) However, we should know each other from some place or another.

My few and far between icons post will stay public.

I've been lighting the candle on Nikita's urn every day. Last night, when I blew it out, this is what the wick looked like. 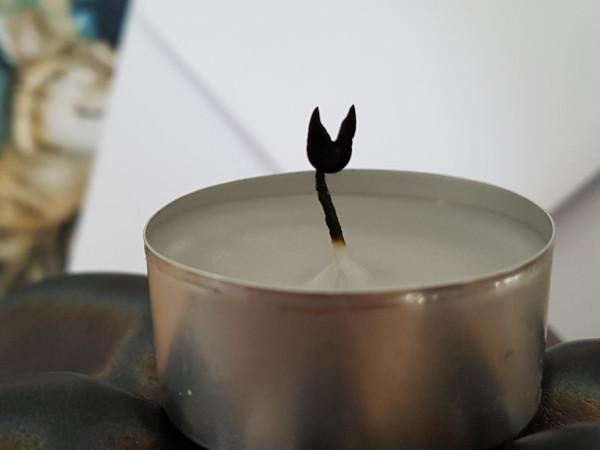 It has been a difficult 10 days. I cried a lot and kept getting upsetting thoughts like "I don't have her scent on me any more, how will other animals know I belong to her?" or the realization that she isn't just gone now, but that I will never, ever hold, see, cuddle her again. I can't count the amount of times I've almost gone looking for her to have a cuddle or thought I saw her from the corner of my eye. My arms also get uncomfortable when I think of how I used to hold her, it feels like a withdrawal symptom. Apparently, I used to always stroke her while on the phone, which I wasn't really aware of, but now I find myself walking from room to room not knowing what to do while chatting with some one. I haven't been able to wash the t-shirt I had on the last time I held her. Through the years I found many of her whiskers, but never kept them, which I regret. Weirdly though, I have been finding them all over the place now and am of course keeping them. In attempt to keep her close, I have commissioned two small resin orbs with her fur in them, one for me, one for mum, to be worn as a necklace.

I struggle with the fact that she was cremated and what that means. What happened to her little, soft body for her to be in that urn. But it was the only option. I would have preferred her be buried some place nice, but we have got so much snow, making a grave for her would not have been possible.

The urn arrived on Friday. I missed the post man and as it was a registered parcel, he took it with him again. I asked at work if could go get the post the next day instead of the porter, so that I could also pick up the parcel. Boss agreed, but her daughter/my co-worker then called her BF and asked him to go get it at 5pm (then the parcels can be picked up). It was his day off, but he agreed to go charm the people at the post into giving it to him. Luckily, I live in a small village where everyone knows everyone, and lady at the counter had also recently lost two pets, so she was empathetic to me wanting Niki back as soon as possible and gave the BF the parcel (even though she was breaking the rules). The first few days I had to stop myself from not taking the urn to bed with me. Part of me really wanted to, but another part was telling me that wouldn't be healthy. I do kiss it goodnight every night, though.

I am so looking forward to seeing this!

Made most these for myself, but decided to share :)

Would any of you maybe be up to sending me the first issue of the "Sons of Anarchy" Comic? Though the Con is still 7 months away, I am already busy thinking abut what to have signed and think this might make a good option. I will of course reimburse you.
Collapse